Heroes, fools and design thinkers meet outside the box

Horos (ancient Greek ὅρος) describes the border, the boundary stone. The human frisson of crossing such a border is stylized in modern horror films. In the movies it is opened up for repeated experience in a deliberate way. Horror (from ancient Greek ὅρος) is, what humans experience, when they cross the ὅρος, or as we might say nowadays: leave their comfort zone. Crossing the line between the known and the unknown and leaving the known territory behind has been very dangerous to humankind for most of its existence. Thus the goosebumps and fear.

In the long gone past natural phenomena, such as rivers, mostly marked the difference between here and there. They functioned as demarcation lines. Early on mankind invented terms to distinguish objects and increasingly used words to draw a line between here and there. This change bears huge costs, because it requires conscious thinking. But despite the cost, we developed into beings, who spend incommensurate amounts of energy on their brains. The trade was worth it, because it allows us to experiment with borders in our heads: We can run small imaginatory experiments and think through, what could happen once we cross the line between the known and the unknown. Or as Whitehead once put it:

“The purpose of thinking is to let our ideas die instead of us dying.”

The innate value of borders

But even with the invention of conscious thought and such in-brain experiments: The difference between the known and unknown remained. Systems-thinkers have expanded this binary logic into theories. They have shown what value it has for social systems - such as states, religious communities, and others - to implement a binary logic successfully. To establish borders and define what is inside and outside of the system is a necessary precursor to any encounter. One is only able to encounter one another as a human being once you and me has been established as different. And thus there is value in systems establishing their limits, forming their borders. But even then: leaving your mapped territory and wandering off into unmapped territory is scary - that is precisely the case, because it remains to be dangerous. The uncomfortable truth is: It also is necessary for continued survival.

To explain why it is necessary, I need to deal with a special aspect of boundaries: The boundaries of boundaries, which rarely receive attention. To illustrate my argument, I will draw on three traditions or thinkers. I believe they have created powerful images that make this difference discernible:

This is why every binary logical thinker could dismiss Schiller ́s critique as sentimental nonsense. By falling prey to the bias of assuming the absence of evidence (for the limitations of binary logic systems) for evidence of absence (of limitations of binary logic systems). Gottlob Frege ́s contribution to the scientific community has not spread as widely yet as I would have expected. This, despite the fact that it is one and a half centuries old.

The limitations of binary systems

The exciting point for me is the following: Although Luhmann and Co. state, that limits must be established; Frege & Dionysos point out that these limits do not allow you to make all decisions. Or put differently: Pure and sound logic will never allow you to make all the decisions you need to make - this has been proven mathematically. If the project of life shall succeed, humans must develop other figures of thought. We need decision practices beyond binary thinking. Humankind must not only overcome boundaries, but also overcome thinking within boundaries that only know here or there. A or B. Black or white. The heroic and daring act of leaving the mapped out territory and discovering or creating new patterns of behaviour and thought is a necessity for continued existence.

"The heroic and daring act of leaving the mapped out territory and discovering or creating new patterns of behaviour and thought is a necessity for continued existence."

Why thinking & acting outside the box scares people:

In my opinion Jordan B. Peterson´s book Maps of Meaning succeeded in explaining why the epics of many cultures praise people who succeed in going beyond culturally determined structures and breaking with tradition. The heroes succeed in wringing something new out of the chaos; something that can only be found beyond the established boundaries of their culture. And what is even more, they succeed in integrating this into the existing zeitgeist and culture. This act is heroic, because you need to actually have skin in the game and put yourself at risk to gain such insights. This remains true, even if you are smart and able to think. You cannot leave the mapped territory and be safe. Playing it safe means staying inside the mapped territory. And even thinking about leaving the known territory can evoke fear. It is thus, that thinking outside the box scares people.

Heroes, fools and design thinkers meet outside the box

On a small scale, companies try to achieve exactly that with their innovation efforts. "Out of the box thinking", "creative destruction" (a term that Nietzsche coined before Schumpeter), Peter Thiel's "Zero to One" or the term "verbindendes Brechen" (Ernst Bloch) are nodal points in the history of ideas that deal with these moments of shifting borders. Human Centered Design provides a framework that aims in the same direction: Namely at a meaningful reframe of problem statements, that open up perspectives into a previously undiscovered solution space.

If social systems - and that includes but is not limited to economic enterprises - want to keep an environmental fit, they need to adapt. But to adapt they need to shift their boundaries in a meaningful way, which is to say: they need to change what defines them. Animals have done that over millennia and the environment encouraged this by killing those who did not adapt. Animals have changed their DNA over time - and social systems need to do so. But precisely how this change shall take place is up for discussion. I believe it involves transgressing borders or "leaving the comfort zone". A friend of mine once scribbled the following down: 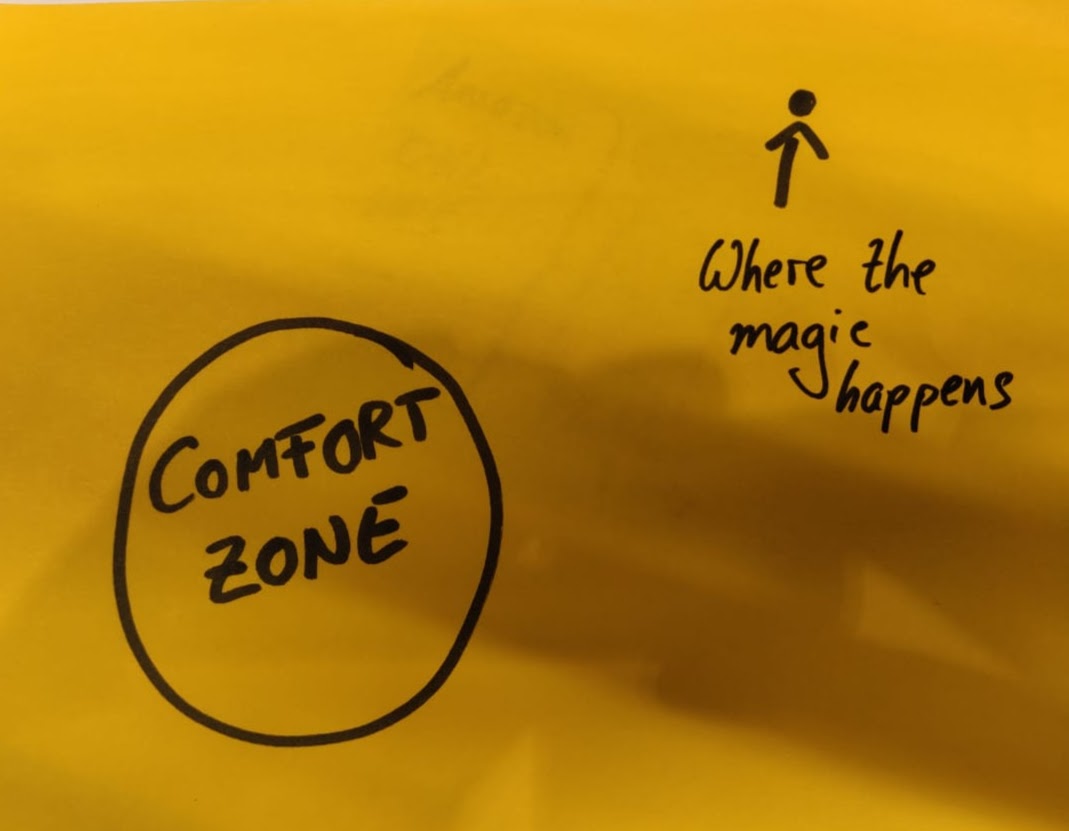 It is worth leaving the comfort zone, because that´s where the magic happens

That being said: This shall not be misunderstood as an invitation to transgress any societal boundaries such as laws arbitrarily. Especially not at the cost of (other members of) the society. Rather this means that if you

At the same time it might be the reason why we initially consider attempts at achieving such new insights to be foolish. Because those who dare, do not necessarily succeed at gaining new and valuable perspectives for their community. In this case they might look like fools. And since we fear the judgement of our peers and do not want to be the fool, we hold back.

It is heroic, because the reframe you provide to your social system was created under personal risk and serves a common benefit. It also means that some of the people we refer to as fools could have been heroes but didn't have as much luck or: They didn't have luck yet - they might still have luck in the future.

Before becoming independent, Sebastian leveraged human centered design to disentangle wicked problems with global top-management teams and delivered design thinking trainings to over 1´000 people. He focuses now on what he loves most: To build a community and improve the way human centered design serves problem-solving in a world with plenty of problems to be tackled.

Please log in again. The login page will open in a new tab. After logging in you can close it and return to this page.

This page uses cookies to provide you with the best experience on our website. If you continue to use this site we will assume that you are happy with it.OkNo